In return for creating a Jeep-only facility, dealers will receive one unit of Jeep allocation for every $8,500 invested, says Gardner. The allocations will be in whatever model mix the dealership’s unit sales reflect and will broken out in 12 equal parts over the course of a year, he says.

“It will pay for a proportion of the new facility,” says Gardner.

Beginning in 2008, dealers were asked by FCA to invest in dealerships that brought Chrysler, Jeep, Dodge, and Ram franchises under one roof. More than 90 percent of the dealerships now have all four under one roof, according to Ralph Kisiel, manager, sales and dealer network media relations.

Now, in a bid to grow sales of its most successful brand, FCA is asking its dealers to invest in another facility. In late 2016, FCA announced plans to have stand-alone Jeep stores at some of its 2,439 dealerships in the U.S.

Every FCA dealer can chose whether or not to participate in the stand-alone Jeep store program, says Gardner. “We aren’t going to force anyone to do it,” he says.

But, “the reality is we are targeting only those stores that really need to expand capacity. We need to increase sales dramatically,” says Gardner.

Jeep is facing a capacity squeeze in the U.S. partly a result of the forced closure of hundreds of Chrysler dealerships when the automaker driven into bankruptcy in 2009. It left the automaker short of not just sales space, but also service lanes.

“Unfortunately, during bankruptcy we reduced the dealership count by 800,” says Gardner. “That is 800 less service departments. We need more service capacity.”

FCA is heavily reliant on Jeep sales, not just in the U.S. but globally. The Jeep brand accounted for 41.3 percent of all FCA sales in the U.S. in 2016, and 46.3 percent of global sales, the automaker says.

China, the world’s largest vehicle market, is a crucial Jeep market. Despite media reports, FCA has no plans to sell the Jeep brand alone to a Chinese company, Gardner says. “We would never sell Jeep without Chrysler, Dodge and Ram,” he insists.

And if the Jeep brand were to be acquired, it would still need a dealership network, he points out. 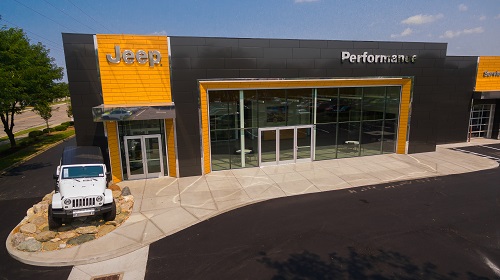 Two of the Jeep stand-alone stores are already finished; some 22 should be completed this year. Ninety more dealers have signed letters of intent. FCA aims to have 300 to 325 Jeep stores nationally by 2020, says Gardner.

“The results coming off the first stores were great,” he says.

The Jeep stores that are already in operation saw a 30 percent boost in sales in the first three months and a 10 percent sales boost in the first eight months in a flat market, says Gardner.

The Jeep stores must meet a facility image requirement, but the size will be different depending on the dealership’s sales volume, says Gardner. 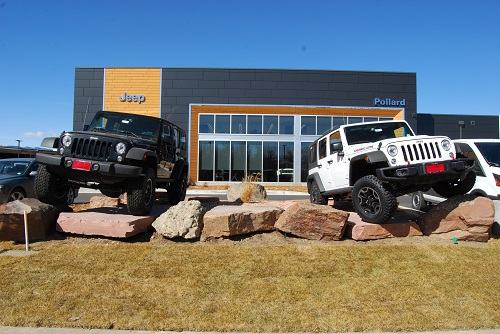 The Performance Automotive Network of Ohio just had a soft opening for its Jeep-only store, in Centerville, Ohio. The grand opening is on September 23.

Shane Dever, vice president and director of operations for the Cincinnati/Dayton markets, says Performance had an empty building that had been a used car center. It was remodeled to become the Jeep store.

He is looking forward to selling not just more Jeeps, but also an array of Jeep accessories. Selling accessories is “the whole idea. It is a lifestyle brand,” says Dever, whose family owns the dealership group.

Indeed, creating a unique customer experience is “the number one reason” FCA decided to launch the Jeep-only stores, says Gardner. “We want [the customer] to have … all Jeep, all the time.” 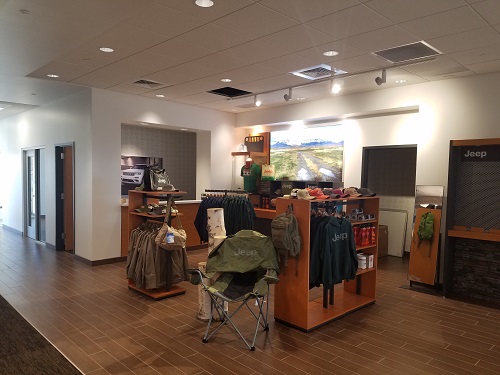 “Surely if this is to be rolled out as a national initiative it would apply downward pressure on the blue sky value of an FCA franchise,” Len Bellavia, senior partner at Bellavia Blatt & Crossett PC, tells Automotive Buy Sell Report. “The expense of construction would have to come from somewhere – and blue sky is the logical category.”

The two truck franchises – Jeep and Ram – are the most valuable part of the multi-franchise dealerships, points out Fred O’Halloran, a consultant with MD Johnson, Inc.

“When you cut that in half, taking off Jeep, I believe the two individual stores are worth less than the four-franchise dealership,” he says.

The stand-alone store may also take a bite out of the dealership’s income, says O’Halloran.

“You have split your operating income for the two stores, but your overhead costs increase because there are two stores,” he says.

Then there is the question of adding bricks and mortar at a time when the retail sales model may be changing, says Nancy Phillips of Nancy Phillips Associates Inc.

“Separation in all its glory will require yet another conglomeration of bricks and mortar all in an era looking out to an unforeseen future when it comes to the bottom line of facilities investment and how vehicles may be sold five to ten years from today,” she says.

There is also the question of state franchise laws, which “are set up to make it equal for everyone who owns the franchise,” says James Taylor, managing director of The Presidio Group

He also wants to clear up the story floating around that FCA said it would add an additional 400 stores in the U.S.

What FCA is doing is preparing its dealers to sell “a staggering amount of Jeeps,” he says.

“Our job here is to prepare the network for an expansion of the Jeep volume in retail. Our direction is we expect to sell a lot more Jeeps even if the market is flat or slightly down.”