When the Glockner Family of Dealerships acquired Superior Chrysler Dodge Jeep Ram a few months ago, Tim Glockner drew on knowledge he had gained from the other acquisitions his family’s dealership group has made in the last two years. At those two stores, the family introduced themselves and reassured the staff that the Glockner group was there to support the staff. That didn’t settle the uneasiness, however. At the CDJR store, Glockner is spending more time, and repeating one message over and over.

“What we learned is that people are nervous. You gotta tell people 100 times its fine,” he tells Automotive Buy Sell Report.

It isn’t that Glockner doesn’t plan to make changes at the newly-acquired franchise. It will bring its processes and sales approach. The aim is to give the staff more opportunities to grow and to earn money.

“We will provide them will all the tools and support,” says Glockner. “They invest their time and talents.”

The first thing Tim Glockner — who’s official title is President but prefers to be referred to as “Head Coach” — will do is introduce the Glockner Family of Dealerships’ specific sales and service methods.  That includes pricing vehicles based on what the market will bear, says Glockner, as long as it is competitive. Customers want a fair price and they want the sales process to be easy, he says. 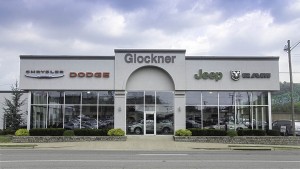 The store is already image compliant, so no major capital investments are needed. Glockner plans to retain all the staff. It did bring in a 12-year employee from another store as general manager. He is actually from Ashland, Ky. where the new dealership is located.

It will add its tagline, “We make it easy,” to the store’s advertising and install its CRM system. The CDJR store will now use the group’s centralized business development center so all calls are answered after the first or second ring. BDC employees can evaluate the caller’s needs and set up an appointment if needed.

Glockner likes its employees to feel like they are partners in the business, and “part of something bigger” than just a single dealership, says Glockner. It pairs employees at different stores, and if a customer can’t find the right vehicle at one store they are referred to a partner at another store. If the customer buys a car at another store, the salespeople split the commission.

It aims to give employees “the mindset that they run their own business within our business,” says Glockner.

Those store owners contacted Glockner about being acquired, says Tim Glockner. As for Superior CDJR, his family had its eye on the store and approached the owners, he says.

They did not work with a broker and paid around three times earnings plus fixed assets and real estate, he says. They paid cash.

“After 169 years and a lot of conservative guys we are able to grow now,” says Glockner.

The CDJR store was attractive because of its franchises and its location. The Glockner Group didn’t have any of the four brands it acquired, and the store rounded out the Group’s presence in the river communities of the Ohio River Valley, in southern Ohio and northern Kentucky.

The towns are only 20 to 30 minutes apart. “This gives us a store in each of the four river towns,” says Glockner. “We didn’t want to compete with ourselves.”

He expects to sell around 600 new and used vehicles a month among all his dealerships, including the CDJR store, with a 60/40 used/new split.

In addition to its new car franchises, the Glockner group operates six buy-here-pay-here dealerships. It also has an auto credit business, an insurance agency, a heavy-duty truck and trailer sales business, a car and truck leasing business, and an oil distribution business.

The group was started in 1912, with a Chevrolet franchise that is the oldest continuously owned and operated Chevy store.

Tim, 39, and his brothers Joe, 38, and Michael, 33, are the sixth generation of Glockners to work in the business. Tim is dealer principal for all the stores; Joe oversees finance, insurance, and the heavy-duty truck operations; and Michael handles sales and marketing.

It’s too early to know if his daughter, 14, will want to continue the tradition. But, “we hope there will be a seventh generation,” says Tim Glockner. “We feel an obligation to continue this because there are so many people who depend on us.”

The group is in growth mode now, a pursuit aided by its long history in the area, says Glockner. It has a reputation of paying well and treating its employees well, and people from competing stores come to Glockner looking for jobs, he says. “Now we have a pipeline of talent that wants to come to work for us.”

The group likes to stay in a 60 to 80 mile radius when it considers new acquisitions, and it doesn’t have its eye on any specific stores right now, says Glockner.

“We will consider anything but I don’t have anything on our radar,” he says. “If it is a good opportunity we are going to take it on.”

As for criteria, “I like the idea of buying stores that are successful, and going in and injecting our process and culture,” he says.

The area doesn’t have any luxury franchises, and though it is a bit of a blue-collar market, “I would love to have a Lexus store,” says Glockner.