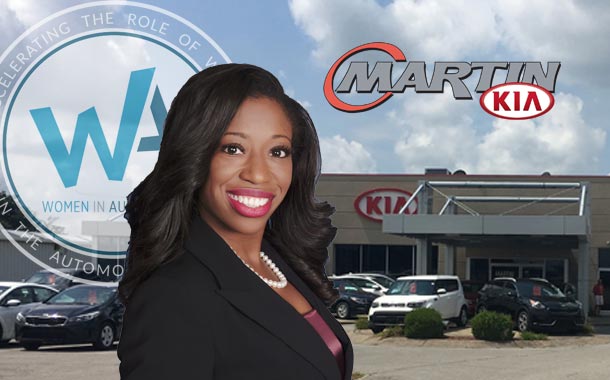 Wadette Bradford is a “gearhead”. As a high school student in Tuskegee, Ala., she took an advanced mechanics class as her elective. And in English class?

It was only natural then, that she would end up in the car business. As General Manager of Martin Kia in Bowling Green, Ky, Bradford is leaving her mark on the dealership and the industry at large. She has now set her sights on owning her own franchise.

“The deal has to pencil,” says Bradford. “It has to be the right opportunity, and there are so many variables. Whenever it happens I am ready and prepared for it.”

Bradford certainly has a wealth of dealership experience after nearly 14 years of retail automotive management. In October 2016, she secured the General Manager position at Martin Kia of the Martin Management Group; one of the largest African-American owned dealership groups in the U.S.

Prior to that appointment, Bradford worked in the service departments at BMW of South Atlanta and Mercedes-Benz of Marietta.

The move to fixed operations was deliberate. Her previous dealership positions had been in sales. Studying at the NADA Dealer Academy in 2010 opened her eyes to the importance of fixed operations to a dealership’s bottom line, say Bradford.

“I had the acumen [for working in the service department], but being able to put a pencil to it – the academy helped me gain that insight,” says Bradford. “I knew [fixed ops] is the area where I wanted more experience.”

Despite her early love of cars, Bradford’s first dealership job – in sales at Madison Square Chrysler Jeep Subaru in Huntsville, Ala. – was not exactly planned.

Bradford was attending night school at University of Alabama at Huntsville, studying for a Masters degree in Public Affairs and Political Science. Bradford saw herself becoming a lawyer.

She read an advertisement for the sales job at the dealership – make $100,000 selling cars, it said – and figured she could do that during the day while going to school at night.

Though she finished her degree, by the time she graduated Bradford knew her future was in the dealership business. She credits another woman with helping her come to that realization.

“I was blessed that across the street from my dealership was Mrs. Ellanae Fairhurst,” says Bradford. “I would call her with all kinds of questions.”

Fairhurst, the first African-American woman owner of a Lexus dealership, began to mentor Bradford, and not just in managing a dealership.

“I owe everything to her, from floor planning to fashion,” says Bradford.

When she graduated, Bradford had a job waiting for her, with Fairhurst at Lexus of Huntsville.

Bradford worked at Lexus of Huntsville in Alabama as general sales manager from 2006 to 2009.

While attending the Dealer Academy in 2010, she worked as general sales manager at Legacy Hyundai in McDonough, Georgia through 2013 with owner Senator Emanuel Jones.

After being slated the Chair of the Junior Leagues of Georgia State Public Affairs Committee, Bradford moved to the BMW dealership and fixed operations.

Bradford is an active member of the National Association of Minority Dealers (NAMAD), and it was through her NAMAD connections that the opportunity to work at Martin Kia arose. She met Amber Martin, co-owner of Martin Management Group, through NAMAD’s program for next generation dealership owners.

The general manager’s job has been a bit different than Bradford initially anticipated, she admits.

“I am learning that change doesn’t happen overnight,” she says.

Bradford thought she would be able to change the dealership culture more quickly, she says. But she has learned that “a culture is something that is developed over time.”

Says Bradford, “We are moving in the right direction. I am not the most patient person but we are all working towards progress together.”

She has achieved much in a short time. The dealership’s inventory turn has increased. The key, says Bradford, has been to managing the inventory so it doesn’t include aged units.

Rather than have aged units sitting on the lot, those aged new units were labeled certified pre-owned and sold. It was hard to take that hit, but “I just let that go,” says Bradford.

In the service lane, she developed a service menu with pricing. That helped boost parts sales, as did ensuring they weren’t carrying obsolete parts.

Another focus has been customer service, especially in the service lane. Using her experience with BMW and Mercedes-Benz, Bradford started a white glove service including pick up and delivery, washing every vehicle, providing loaner vehicles, and even putting healthy snacks in the waiting area.

“The amenities have really helped,” says Bradford. The dealership’s CSI scores have improved, she says.

Bradford kept the entire dealership team. It is an area where you have to systematically make adjustments, she says.

“You have to get a feel for the way things are flowing. [Then] you can modify the process and make personnel adjustments as needed.”

Bradford was the most recent recipient of the Cox Automotive and NAMAD Rising Star award. She aims to help other minority women be rising stars, as well. For example, she is mentoring Miss Tyra Harris, one of five recipients of the $10,000 “Fueling Careers” scholarship offered by CDK and NAMAD.

Bradford says she is always looking for opportunities to bring other women into the dealership business. She also works to make her dealership more woman-friendly with features such as Wednesday Ladies Day when women get discounted services, free roses and cupcakes.

Her near term goal is to make her Kia store more profitable, and “grow our customer experience to exceed customer expectations,” says Bradford.

She also aims to build on the legacy of Mr. Cornelius Martin, the African-American founder of the Martin Management Group who died unexpectedly in a motorcycle accident in 2006.

Bradford clearly plans to build on his legacy in another way, as well – by becoming the owner of her own dealership group.

Given the depth and breadth of her management experience, she is ready for it.