Morrie Sage was a visionary.  In the mid-1950s he became a minority holder in a Ford dealership in downtown Los Angeles. But Sage believed that, despite lingering anti-Japanese sentiment from World War II, Japanese auto brands would become more and more popular.  He opened one of the first Datsun dealerships in Universal City in 1969. 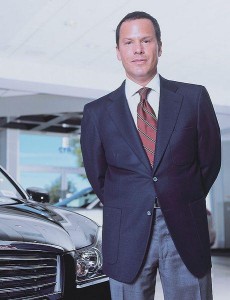 Nearly 50 years later, Sage Automotive Group owns a handful of Nissan dealerships as well as seven other franchises. All are in the Los Angeles metroplex, but not in its most far-flung reaches. That is in keeping with another of Morrie Sage’s beliefs, his son Joseph Sage recently told Automotive Buy Sell Report.

“My dad would say, “If you can’t get to a dealership in the morning and get home at night, it isn’t worth buying,” said Joseph Sage.

That hasn’t stopped the Group from growing, albeit in a very strategic way. And there are some brands that the Sage Group would still like to own.

The Sage Automotive Group footprint spreads from the edge of Orange County in the south to Valencia in the north. It sold some 15,000 new and 9,000 used units in 2014. Its franchises include Nissan, Infiniti, Scion, Mercedes-Benz, Lotus, Kia, and the most recent addition, a Chevrolet store on the southeastern edge of the metroplex.

The Chevrolet store was acquired through an interesting series of transactions. Sage had a Toyota store in Covina that competed with Longo Toyota, the world’s largest Toyota dealership by volume. The opportunity to sell the store to Penske arose at the same time the Chevrolet dealership filed for bankruptcy. That bankruptcy created an open point, which General Motors awarded to the Sage Group.

“We talked to Ford and Chevrolet about dealerships (in West Covina and Covina),” said Sage. “Chevrolet seemed like a better fit for the market.”

The Sage Group was not allowed to buy the real estate the Chevrolet store was on because of the bankruptcy. So it is renovating a former Enterprise Rental Car building to house the Chevrolet dealership. Meanwhile the Chevy store is operating out of a temporary building and “doing well,” said Sage.

Although it didn’t pursue the Ford store in West Covina, which is in the southeast part of the Los Angeles metroplex, Ford is one franchise the Group would like to have, said Sage. Also, “I would absolutely like a Cadillac dealership,” he said.

The three Sage brothers all work in the business, but there isn’t a deep bench of successors to run the business yet.

Right now, his oldest daughter is the succession plan, said Sage, 51. That daughter, 20, is in college in Texas and will likely intern with the Sewell Group this summer. “She has more of my father’s DNA than I do,” said Sage.

As for general managers for its stores, it generally promotes from within, he said. Though the Group hasn’t offered part ownership of a store to the general managers in the past it is thinking about it now, said Sage.

The Morrie Sage philosophy of growth

The Sage Group has plenty of opportunities to expand. “I get calls from brokers all the time for stores in other areas,” said Sage. Also, because the Sage family emigrated to the U.S. from Cuba the dealerships qualify as minority-owned, and he gets notices from the National Association of Minority Automobile Dealers, said Sage.

But he believes in sticking to his dad’s advice about drive time as a criteria for store selection. Too much time driving between dealerships would mean it would be hard to manage both business and home life properly, said Sage.

The geographical limits the Group sets on acquisitions means that its growth will likely need to come from acquisitions rather than open points, he said. It has Nissan “covered regionally,” said Sage. As for other franchises, in Southern California “it is rare to see an open point,” he said.

That doesn’t mean the Group isn’t looking to grow, however. “We don’t have a target, but we have ambitions,” said Sage.