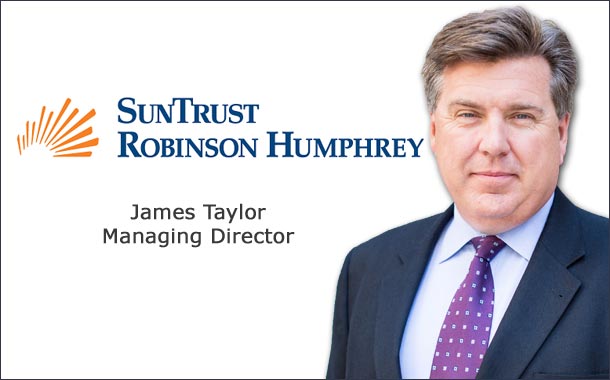 SunTrust Bank and BB&T just announced they would merge, becoming the sixth largest bank in the U.S. That merger could potentially give James Taylor an even bigger platform from which to launch SunTrust’s dealership buy sell business.

“The resources I have currently with SunTrust Robinson Humphrey are fantastic,” Taylor told Automotive Buy Sell Report before the BB&T merger was announced.

He wouldn’t comment on the merger because it hasn’t closed. But it is safe to say the resources Taylor will have to work with after the merger will be simply enormous. The combined entity is projected to have $442 billion in assets, $301 billion in loans, and $324 billion in deposits.

But SunTrust hasn’t been doing dealership mergers and acquisitions, he says. Taylor’s mandate is to launch a buy sell business with a national focus.

“The leadership at SunTrust has recognized there is a void among major lenders offering a full range of service from acquiring your first dealership to monetizing your automotive business,” says Taylor.

The bank will work with all size deals, from a single point dealership to a large platform sale or acquisition. Its first obligation, Taylor emphasized several times, is to serve the bank’s existing dealer clients. “If they want to grow, optimize, or they want to get out, we are here to help them” he says.

No deal too small

Few full service banks are involved in dealership mergers and acquisitions. If a bank is properly credentialed for that kind of business, says Taylor, the automotive retail world is “too fractured and small” to get involved in.

“No deal is too small or too large” for SunTrust, he says.

Because it has a full-service corporate and investment bank, SunTrust can offer “a soup to nuts approach to all the capital needs a dealer is going to have in their life as car dealers and post-dealership life with our private wealth advisory” says Taylor.

There are three primary reasons a dealer sells his or her dealership, he says. They want to retire for any number of reasons from health issues to spending more time on other pursuits or pressure from the manufacturer. Other dealers are aging and have no successor. In those cases, SunTrust can help dealers monetize their assets, says Taylor.

The second reason is shareholder issues such as not wanting to work with a partner any more or other shareholders making decision one doesn’t agree with. SunTrust can suggest alternatives so the dealer won’t have to exit the dealership or provide alternative investors who are a better fit with the dealer.

The third reason is the best reason: maximize the sale of their business while the auto retail industry is strong and interest rates are low.

While no deal may be too small, SunTrust is clearly after the megadeals.

He joined SunTrust, says Taylor, to have the resources to conduct the “very large transactions that we believe are going to happen in the dealership world.”

Says Taylor: “We believe there will be decidedly fewer dealership owners in the medium to longer term.”