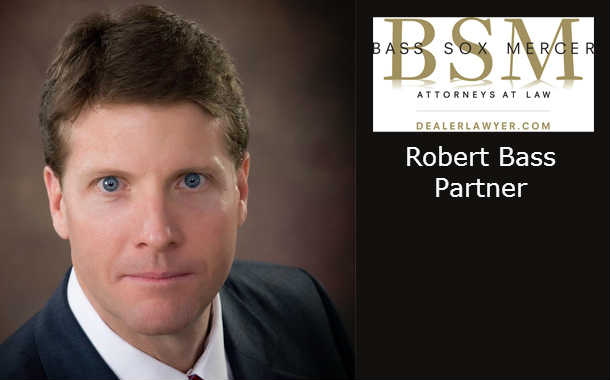 In 2014, Bass Sox Mercer closed 27 buy sell deals, an historical high for the law firm. As 2015 begins, the firm has 14 deals in its deal pipeline, partner Robert Bass told Automotive Buy Sell Report. “This year will be at least as active as 2014,” he said.

It is no secret that just about everyone involved in buying and selling dealerships is seeing a lot of work these days. Bass Sox Mercer, based in Florida and North Carolina, with an of-counsel office in New York, is as busy as it has ever been, and expects 2015 to be equally hectic.

Partner Robert Bass talked with Automotive Buy Sell Report about what is behind the market activity and about the new kinds of buyers coming into the market.

Dealer succession challenges were at the root of most of his deals last year, said Bass. Many of the Sellers were in their 60’s, 70’s, even 80’s, and had no successor available. Many of these same owners wanted to sell six or seven years ago but put it off after the bottom dropped out of values in the downturn of 2007-2008, he said.

Now, “liquidity is back in the market,” said Bass. “Values have started to come back to former levels.” Those improving economic variables, along with generational changes, such as  dealer retirements, will continue to drive buy-sell activity, he said.

Bass Sox Mercer closed five transactions involving General Motors divisions in 2014, the highest among the brands, said Bass. Toyota was second with three closings. His remaining closings were scattered among brands. Geographically, the deals were spread all over the U.S.

Lack of management depth has been another recent deal driver, said Bass. For example, one Florida client was successfully running a Toyota store, then bought another brand’s dealership as well. “No matter how hard he tried, he couldn’t make that (second) store run even though it was not far from the Toyota store,” said Bass.  After a few years, he decided to sell the second store.

“If you want to expand, you have to consider who is going to run that store, and carry on the systems and processes that result in success,” said Bass. “There is a technique to it. A prudent buyer should have the resources to become managerially heavy so it has available key managers to move from the existing store” to the new store to implement the buyer’s vision and way of conducting business.

Sellers are also being lured back into the market by reports of very high multiples on some brands, but Bass cautioned against relying too much on those general values. “The Blue sky multiple at or before closing is only one side of the story,” he said.

For example, say a Toyota store is under-performing, but because it is Toyota and sellers and buyers are of the opinion a high blue sky multiple is warranted, it sells for a price that equates to ten times earnings, said Bass. When a new owner comes in and boosts the performance, earnings go up and the multiple comes down, he said. So the multiple of earnings calculation 6-12 months after closing may be something entirely different than the multiple at the time of closing.

“A shrewd buyer won’t pay a top multiple for a store that is performing really well,” he said. “If a buyer hears a brand is going at 10 multiple, he needs to be careful about universally applying that pricing technique.”

The private equity buyers (as opposed to the traditional existing dealer buyer) that are now eyeing the dealership market should also be more open-minded when valuing a store, said Bass.

Many private equity buyers come from a universe that places an emphasis on trailing earnings, that is, how good the dealership’s cash flow is, he said. That approach can lead to undervaluing the acquisition and can mean missed opportunities as competing traditional buyers often have more of a forward looking approach to arriving at a dealership’s purchase price.

Dealerships are unique in how they record earnings; for example, commission and other variable expense structures can vary significantly among dealers, said Bass. When traditional buyers evaluate an acquisition, most are mainly concerned with the number of vehicles previously sold by the target in the market, what that dealership should sell, how many repair orders the dealership generates on an annual basis, and the upside opportunity for increasing the volume of the repair business. Then the traditional buyer considers how they can change a store’s processes to improve on those numbers.

He hasn’t personally encountered a lot of private equity buyers in the last six month, said Bass. He believes they may be re-thinking their investment strategy since Berkshire Hathaway entered the market. There is some concern that Berkshire Hathaway’s entry may inflate values, at least in the near term. Most buyers don’t want to compete with “the horsepower of a Warren Buffett” he said.

But that doesn’t mean they aren’t still interested in dealerships.  They are just figuring out the best strategy in a changing market, said Bass.  Not every store or group of stores fits into the acquisition strategy of a large institutional investor like Berkshire Hathaway. There will still be attractive opportunities for buyers.

“I think the PE people will evolve into a hybrid between a traditional automotive dealer buyer and a traditional PE buyer,” he said.

Bass Sox Mercer has a couple of deals involving private equity or like deals in its pipeline right now. The dozen or so additional deals the firm is currently working on involve smaller groups or individuals buying one or two stores, said Bass.