A woman’s place is in the dealership for Cherie Watters

Cherie Watters, chief financial officer and chief operating officer of the O’Gara Coach auto group in Beverly Hills, CA, has thought about owning her own dealership for decades. She still thinks about it. But her current situation is pretty great, Watters admits.

“The things we get to do here are so different,” she tells Automotive Buy Sell Report. “I am not done with the experience here yet.” 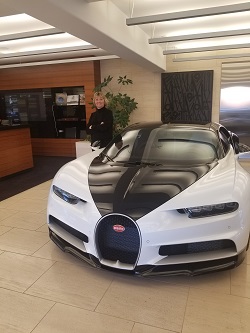 In 2017, O’Gara sold over a thousand vehicles retail.

Watters joined the group in 2016 after the owners, Tom O’Gara and his sister Maureen, contacted her to do some consulting work. They ended up hiring her for a full-time position and “I became CFO and COO a few months later because of my operational experience,” says Watters.

That experience includes decades of working at volume brand and luxury dealerships. Along the way, Watters has faced personal and professional hurdles that would have derailed many.

Watters attributes her success to good mentors, curiosity, and to a childhood spent around technicians. Her father owned a marina in Atlantic City, NJ, and repaired a lot of boat engines, says Watters. So, she heard a lot of talk about engines and “technical type” work, says Watters.

She was naturally drawn to “that type of gentleman,” and her fiancé wanted to be an auto technician. Watters got a job at a dealership in Atlantic City to maintain the lifestyle she wanted and support her fiancé while he studied to become an auto tech. “We could someday have our own dealership together,” she planned.

Her first dealership job was in the office, as a DMV clerk, at a Cadillac Pontiac Rolls Royce Lamborghini store, where she started working while still in college studying for a business degree. Sitting at the DMV desk in the dealership, Watters already had bigger plans. “I said to some of my friends, ‘I want to be a controller,’” says Watters.

That was where she had a great mentor, the dealership’s controller, says Watters. It helped that she asked a lot of questions. “I loved talking to people,” she says. “In between learning the business aspects and how the dealership operated and ran, at such a young age, I consider it a gift.”

She moved up the ranks at that first dealership, then was hired by another local Cadillac Pontiac store to be the controller. They were opening an Acura dealership in Florida and offered Watters a job there. She jumped at the opportunity. But between taking the new job and moving to Florida, her by-then husband – who did become an auto technician – was killed in a car accident.

“It made me driven to succeed in the auto industry in particular,” she says.

The new job in Florida, which involved building the Acura dealership, became her purpose in life after the accident, says Watters, in her late 20’s at the time.

Watters helped construct the Acura dealership in St. Petersburg from the ground up, even taking the delivery of the first vehicles, on Christmas Eve. She was the only one still in Florida – the other employees had returned to New Jersey for the holiday.

“I opened the store and helped drive the cars off the truck,” she says.

After the Acura dealership, a 10-year stint as an assistant controller and controller at a large Toyota store in Miami owned by Craig Zinn, and work with a dot com firm that wrote some of the first customer relations management software, followed.

Hired away from the dot com to work at the chief operating officer of a Honda Ford Mazda dealership in Miami Beach, FL, Watters helped turn that store around. A visit to friends in Southern California –and experiencing the weather there — prompted her next move.

She sent out resumes to SoCal dealers. After working as a controller at an AutoNation Toyota store in Southern California, an opportunity to be a General Manager at a Hyundai store arose.

“It was always my goal to be a General Manager,” says Watters. “Everything I did was towards that end.”

She took over five dealerships – 2 Hyundai, 2 Kia, 1 Chevrolet/Buick – in Los Angeles’ Korea Town area in 2006. Hyundai was not a popular brand in California at the time, and those stores failed after two years. “But it led to a very good relationship with Hyundai,” says Watters.

At the very male-dominated company, “I had some managers that wouldn’t even acknowledge me,” she says. “But I prevailed.”

It seemed Watters was on track to own her own dealership with her next job, managing a Hyundai dealership with an option that could lead to full ownership. But the dealership was owned by Denny Hecker. It was shut down and he was jailed for fraud.

Fortunately for Watters, “Hyundai really liked me,” and the automaker recommended her to a Korean investor looking to open a Hyundai store in Puente Hills, a suburb on the far east side of Los Angeles.

They turned that store into a top five dealership, but there was no possibility of ownership. So, when Hyundai approached her in 2012 about a buy-in option with another group, Watters made a move. It didn’t work out, though, and Watters realized she had made a mistake leaving her previous position.

“I loved the previous job,” she now says, “but there was no opportunity for ownership. I had to say, ‘what is more important?’ It was about fulfilling that dream” of ownership.

Next, Watters helped Howard Keyes open a Hyundai store in the Los Angeles area. Then, she and Jodi DeVere, founder of Ask Patty, which certifies “women-friendly” dealerships, started talking about starting a consulting business. Watters resigned her job with the Keyes group, but before the consulting business got started Watters was diagnosed with breast cancer.

She devoted her full attention for a year and a half to treatment and recovery (her cancer is in remission now). Watters attributes the support of DeVere and other women in the auto industry with helping her through that period.

Then, she got the call about the O’Gara Group.

Talking with her clients is one of the best parts of her job, says Watters. She has a lot of back office support. That allows her time to chat with them about the cars. It is different from any other dealership she has worked in, says Watters. The O’Gara dealerships are more like art galleries than car dealerships.

“Nobody needs one of our products,” she says. “They are more like artwork. Our clients have cars they may only put 500 miles on in an entire year. We sell products that are put on display.”

There are only 44 dealers in the U.S. that carry the brands that O’Gara carries, says Watters. The brands are innovative, and all their franchises are top performers. Her goal nowadays is to get more women to buy their cars. Women tend to be more practical than men when they purchase cars, says Watters. The aim is to convince women they can give themselves “permission to buy one of our cars,” she says.

And what about the dream of owning her own dealership?

“I have never been able to quite utter the words ‘no, I am not going to become a car dealer,’” says Watters. But, “I love the people I work with. Last week I was out at the race track driving Lamborghinis. Sometimes it is interesting where your dreams lead you.”