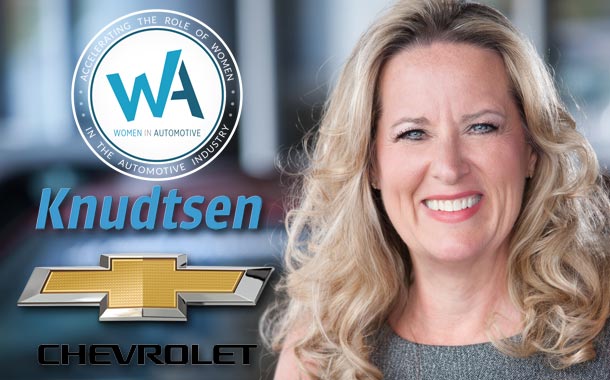 Eve Knudtsen, who has a degree in automotive marketing from Northwood University, was working for General Motors in Detroit when she realized that her true calling was selling cars. She returned to Idaho to work at her family’s Chevrolet store. But being a woman, and the owner’s daughter, created some doubts among the long-time sales staff.

“They thought I was just going to hang out until I found a husband,” says Knudtsen. “[But] in my mind, I was always going to take over.”

Dealerships have long been bastions of male employment. That has slowly begun to change, but women at the top rung in dealerships are still a relative rarity. There are some great role models out there, however, such as Eve Knudtsen. She is now a champion for more diversity in dealerships.

“You are ignoring a whole talent pool if you aren’t diversifying,” she tells Automotive Buy Sell Report. “People want to do business with people who are like them. It makes them feel comfortable and that there is a place for them.”

She tailors her recruitment message and jobs to match different groups’ needs. That’s important because job security isn’t the main message that attracts this generation of employees, says Knudtsen.

When Knudtsen wanted to hire college-age applicants for positions in her dealership, she took a “totally different” approach.

They are looking to rise through the ranks, be it with Knudtsen Chevrolet or another company, she says. So, her recruitment message is that working at the dealership will prepare one for leadership at any company.

“I am promising them a future,” says Knudtsen. “The honesty of this message is resonating with this generation.”

For example, two years ago Knudtsen Chevrolet hired a business development center agent who really wanted to go back to school and work in information technology, says Knudtsen.

The dealership outsourced its IT, but she told him she would help him find an opportunity when he was ready. The employee recently received a job offer the firm that the dealership contracts with for its IT needs.

It takes a different approach in the job, as well. Millennials want “a tremendous amount of engagement with each other and their supervisors,” says Knudtsen. So her young employees get regular feedback rather than just the traditional annual performance review.

Knudtsen also mentors young women. Her former assistant, who is the granddaughter of a now-retired service manager at the dealership, rose through the ranks after starting as a receptionist. The young woman took advantage of the dealership’s college tuition reimbursement policy, got a degree, and now works at an accounting firm. Knudtsen is mentoring her.

Diversity is paying off. New and used sales through August at Knudtsen Chevrolet rose 23 percent compared to the first eight months of 2015 to 1,176 units.

Keeping it in the family

Eve Knudtsen is the third generation in her family to run the Chevrolet dealership. She has a brother, and growing up her father’s vision was always that he would pass the dealership on to his son, she says.

“I always thought there was another option,” says Knudtsen.

She didn’t go straight from Northwood to work at the family dealership, however. General Motors had just acquired EDS when Knudtsen was studying at what was then Northwood Institute. She was recruited to work at EDS after graduation, but she disagreed with GM’s method of training dealers to use the EDS system.

“After eight months, I went back to retail,” she says.

That was when the long-time employees figured Knudtsen was just husband-hunting. Instead, she went to the NADA Academy to learn more about running a dealership. After graduating from NADA Academy, Knudtsen moved to Los Angeles for work, first in sales at Chevrolet and Toyota dealerships, then in the F&I department at the Toyota store.

She rose to become F&I director, but the hours – six days a week, eight to ten hours a day – were not to Knudtsen’s  liking. She was considering other options when her father called and asked Knudtsen to come home and be general manager of Knudtsen Chevrolet.

It wasn’t always a smooth transition. In 1998, for example, Knudtsen was ready to quit over a disagreement about used car sales. Her brother told their father, “Don’t let her go,” says Knudtsen.

Her brother, who preferred wholesale to retail sales, left to work elsewhere, but Knudtsen invited him back in 2005. There was also a dispute with their father’s wife, who treated the dealership as if it were a “blank check,” says Knudtsen.

Fortunately, their father’s estate plan made it clear that the dealership would pass in full to her and her brother, with their father’s wife receiving a monthly income, she says.

Knudtsen and her brother are both married, and they already have an estate plan in place that ensures his wife won’t become Knudtsen’s partner. “It is really important to set these things up,” she says.

Her daughter by her first marriage, who graduated from college last year, is working at the dealership on “whatever projects need to be done,” says Knudtsen.

The dealership has always been a single point operation, but Knudsen is ready to grow. Staying with General Motors would be easiest, she says. If the next franchise is a GM brand, someplace in the northeast or even California would be good, says Knudtsen.

If a non-GM brand, she would like it to be a bit closer to home. She is interested in foreign and domestic brands. “I am open to anything,” says Knudtsen.