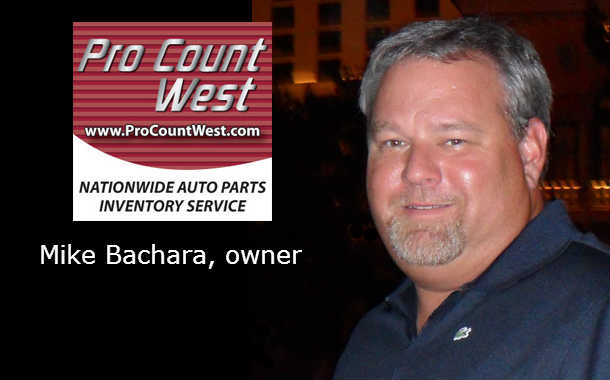 Posted By: Alysha Webbon: May 11, 2016In: Contributors
Print Email

By Mike Bachara, owner of Pro Count West, in conversation with Alysha Webb

Planning ahead is generally a good idea in life and in the buy sell world. Take your dealership’s inventory. Having a solid snapshot of what it looks like long before you sit down to negotiate a buy/sell agreement can save you money and a lot of potential grief.

“Why not get a good snapshot of it so you won’t be surprised?” Mike Bachara owner of Pro West Inventory, tells Automotive Buy Sell Report.

“If you are even thinking of selling your dealership down the line, have someone do an analysis of your parts inventory,” says Bachara. “If you catch it ahead of time you could solve a lot of parts [problems] you might otherwise be stuck with.”

Inventory includes more than just a dealership’s physical spare parts. It also includes any pending credits, any used core value on parts that have a deposit value, damage claims or shortage claims, work in progress in the service department, the open parts counter, and any returns. The latter items are still on your books in the accounting office, explains Bachara, and so are considered part of inventory.

The inventory calculations are usually done a few days before the actual closing of a buy sell agreement, he says, but “I recommend doing it well ahead of time.”

A buyer will want to pay for as little inventory as possible, and knowing how much of your inventory is saleable allows you to negotiate a better deal, says Bachara.

For example, a dealership may have $100,000 inventory on its books, but only $80,000 of that is saleable. If you know that before you go into a buy/sell negotiation you can at least try to dispose of some of the unsaleable parts, he says.

A customer with a General Motors franchise dealership who was thinking of selling came to him confidentially for an assessment of his inventory, says Bachara. Pro Count West looked into GM’s Retail Inventory Management program to see which parts were returnable and which were non-GM.

“He was able to negotiate a better deal on the remaining inventory,” says Bachara.

Most manufacturers have similar RIM programs, he says, through which they send dealerships parts and take back parts that a dealership isn’t able to sell. If those programs aren’t well-managed,   “you are left with a bunch of parts that have no value,” says Bachara.

It helps to parse the details in those agreements. Most agreements are written to exclude parts that haven’t sold in 12 months or longer, says Bachara. Some manufacturers now “protect” inventory for up to 16 months. The old “12 month” rule defining obsolescence is in itself now obsolete.

On the flip side, consider a part that HAS sold one time, 11 months ago, in the last 12 month. In most agreements, that part would be eligible to be purchased by the incoming dealer. On top of that, what if you had 10 more pieces of that part on the shelf? What if those 10 pieces’ cost per unit was something like $1,000.00 each? Clearly, the 12 months-no-sale example doesn’t work in every case, says Bachara.

Pro Count West has offices in Arizona and Chicago. Bachara, who is from Chicago, worked as a dealership parts manager for 20 years. His father started the inventory parts management company in 1981, and in 2002 Bachara moved to Phoenix, Arizona to expand the business.

A standard inventory is worth about $300,000. He has a formula to determine the cost of counting that inventory based on dollar value, what needs to be counted, the location, and the DMS system. In buy/sell deals, the assessment cost is a bit higher because it is more labor intensive, says Bachara.

Paying for an inventory count is always a good idea, he says.

“It doesn’t take much for you to get sideways on inventory,” says Bachara. “You could potentially lose tens of thousands of dollars” through people not keeping track of parts that come in or are sent back, or other mishaps, he says.

In a buy/sell, “there is no danger for the buying dealer,” says Bachara. “The danger is for the selling dealer, not knowing what kind of inventory they have.”