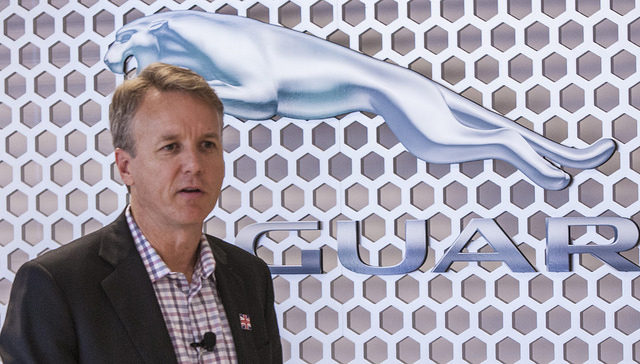 Jaguar dealers have a lot to look forward to in the next few years. Staying on message will be key to making the most of the developments.

Jaguars have featured prominently in a few James Bond films, but the models on offer to the public have been so pricey that few of us could do more than imagine how it might feel to own a Jaguar. Jaguar Land Rover aims to change that.

The brand is struggling in the U.S. market. In the first nine months of 2015, Jaguar sales fell 5 percent to 11,216 units. But the automaker has an aggressive new model introduction program planned for the next several years, Marchand told automotive journalist at a lunch presentation in September at its North American headquarters in Southern California. It has a nationwide marketing plan and new customer care program as well.

Jaguar will make sure its dealers are part of the plan, said Marchand.

“Jaguar is supporting our retailers in several ways to bring this Next Generation of Jaguar to life in their local markets. We have covered all of the bases to ensure they are in lock step with us as we move forward to tell this story to consumers consistently,” he told Automotive Buy Sell Report.

Jaguar will launch five cars in the next 12 months. Among those, the standouts are two models aimed at the fast-growing entry luxury segment:  the F-Pace compact SUV and the XE compact luxury sedan. Jaguar figures it will triple its market reach with the addition of these two models.

The F-Pace is Jaguar’s first SUV, and is priced starting at $40,990. It was just revealed at the Frankfurt Auto Show. 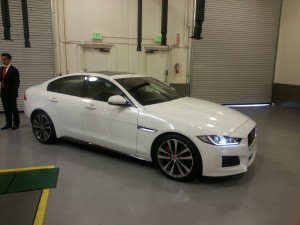 The XE compact luxury sedan will start at just $34,900.  Both are due to go on sale next spring.

Marchand referred to the XE as “the backbone of our growth strategy” because of the price. “We have to be more attainable,” he said. But the SUV is also vital to Jaguar’s sales success, Stephanie Brinley, senior analyst for North and South America at IHS told Automotive Buy Sell Report. “SUVs are hot and not having an SUV costs [Jaguar] customers right now,” she said.

To let consumers know about these new, competitively-priced models with their “best in class” (according to Jaguar) customer care program, Jaguar is relying on “The Art of Performance Tour.” Starting at the Los Angeles Auto Show in November, Jaguar will take the new models to seven cities. Consumers will get a chance to drive the cars and to be the star of their own movies focused on their test drive. That will allow the automaker to “really tell the Jaguar story,” said Marchand.

This big push should help clarify the Jaguar brand in consumers’ minds, said Brinley. It is “still a little bit of an unknown” in U.S. buyers’ minds, she said. Jaguar is trying to make its image a bit more modern and cutting edge, especially with the SUV. But working with the dealerships will be crucial, she said. “You have to have consistency with a message if you want to drive it home,” said Brinley.

Marchand said that Jaguar dealers will receive training “to ensure their teams are on board with not just the brand positioning, but the stories of substance that make it real for customers so they can see the benefits.

One thing Jaguar has going for it is its owner, India’s Tata Group. Tata has “shown real commitment to both Jaguar and Land Rover,” said Brinley. IHS sees Jaguar’s North American sales rising to 50,000 units annually by 2018.