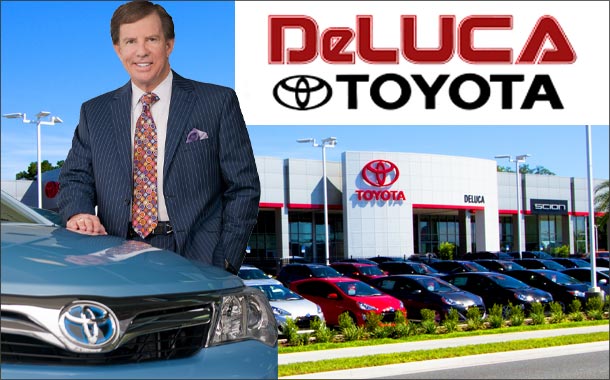 A customer stands in the two-story atrium in the showroom at DeLuca Toyota. He eyes the curving walkway above the light-flooded room and begins to sway back and forth. “’Are you okay?’ I asked him,” says Frank DeLuca. “Yes, but I feel like I am on a luxury cruise ship,” says the customer.

DeLuca Toyota, in Ocala, Florida, has taken the concept of customer experience to a whole new level. By creating an environment in which people want to do more than just buy a car, or have their car serviced, DeLuca is cementing customer loyalty and boosting profits.

“My plan was to do something people would rave about,” DeLuca tells Automotive Buy Sell Report. “I wanted to make [this dealership] a little different. This would be a way to stand out from the other dealerships.”

DeLuca invested $15 million to construct the new facility and buy property down the road for storage. In the dealership, the atrium soars 23 feet, the sales office walls are transparent, and the 42-bay service area is air conditioned. Its floors are so clean the floors would pass the “five second rule” if any food were dropped on them, says DeLuca. 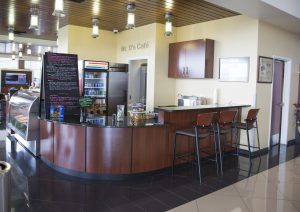 The café at DeLuca Toyota has become a destination for more than just service customers.

It has a women’s boutique and a putting green on the top floor. The dealership café is run by two gourmet chefs, serves fresh lox and bagels for breakfast, ahi tuna for lunch, and fresh lobster rolls on Friday. “People come here just for lunch,” says DeLuca.

The investment already seems to be paying off. The new store opened on January 15, 2016. The dealership is one of the most profitable in his 20 group, says DeLuca.

DeLuca Toyota was doing well before the remodel, with gross sales of $126 million and annual unit sales of 2,563 new and 1,520 used vehicles in 2015. But DeLuca wanted to create a truly unique experience at his dealership.

So the 70-year old traveled the country visiting Toyota and Lexus stores to get ideas. From Chicago to Atlanta to South Carolina, and all over Florida, DeLuca took pictures of features he liked. “I wanted warm and inviting colors in a neat and clean facility that you could walk from the service area into a lounge in,” he says.

But DeLuca has, indeed, created a destination. He tells another story: A retired school teacher came to the dealership at 9 AM to have her car serviced, and settled down at a table with a highlighter and some paper work. At 2 PM she was still there. Her car had long been ready. But she stayed on, had lunch, and still lingered.

Her home was a 45-minute drive away, explained the visitor. She had some work to complete and “I am more comfortable here than at home.”

Frank DeLuca got his start in the dealership business when he was 16, detailing cars at a late model used car dealership. The owner asked him if he had ever thought about selling cars, and DeLuca started doing that on weekends. Then, the owner acquired one of the just-arrived Mazda new car franchises.

DeLuca worked in a variety of positions at the Mazda dealership for 10 years, marrying his high school sweetheart along the way. When the owner died DeLuca looked for other opportunities. A tiny Toyota dealership was for sale in Ocala. In 1978, he bought it for around $1 million.

“There was no blue sky value back then,” says DeLuca.

It had 18 employees and three acres of land. Tumble weeds blew past. The dealership had brown and orange shag carpet.

Even then, DeLuca was a stickler for customer experience. He insisted on a spotless environment. “’I would tell the customers, ‘If you find one drop of oil, I will give you a car for free.’ I never gave away a Toyota,” he says.

The store is located on SW College Road, Ocala’s auto row, and now shares the street with Honda, Acura, Buick, Cadillac, and Kia dealerships, to name a few. But when DeLuca acquired the original store, there was nothing else there.

He continued to acquire land and now occupies 24.7 acres. The original 500 feet of road frontage has grown to 1,100 feet.

Many of his customers now are the grandkids of his original customers, he says. Some 81 percent of his clients are repeat customers.

Neither DeLuca’s son nor his daughter are interested in running the store. He has been approached by other Toyota store owners about acquiring his dealership, but isn’t interested in selling right now. After all, he has a pristine reputation and a brand new facility, says DeLuca.

He is working on estate planning. “But I don’t have any intention of hanging up my spikes yet,” he says.