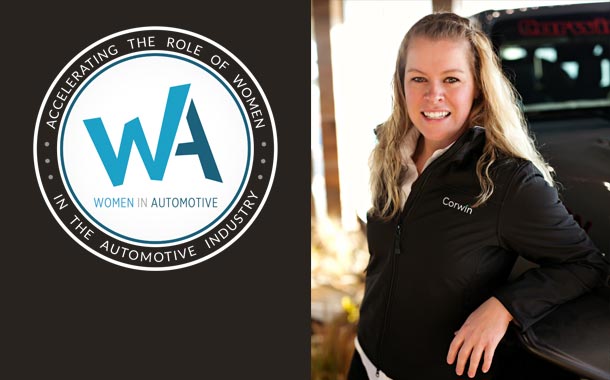 Posted By: Alysha Webbon: May 11, 2016In: Contributors, Women in Automotive
Print Email

Amy Bannor, internet manager at Corwin Chrysler Dodge Jeep Ram in Fargo, N.D., loves social media. It combines voice and visual and gives customers a choice of how they want to interact with a dealership.

“You can’t get that with any other media,” she tells Automotive Buy Sell Report.

The internet has another advantage, as well. It allows Bannor to personalize her message in a way that other avenues of outreach just can’t.

“It is a reflection of my personality in the auto industry,” Bannor tells Automotive Buy Sell Report. “I think that if people realize sales people are human, it breaks down barriers.”

She has created her own brand on social media – “Just a Girl Selling Cars.” Her Facebook page has nearly 2,000 “likes” and she is rated as “very responsive” to messages by Facebook.

Bannor figures her “Just a Girl Selling Cars” persona is non-threatening and encourages both men and women to reach out to her on social media and, hopefully, to come to the dealership to buy a car from her.

Each day, she answers questions and posts comments and videos.

Bannor sees videos as one of her most effective sales tools. Posted on the Just a Girl Selling Cars Facebook page, the videos aren’t high-tech affairs. She creates them using a smart phone and a selfie stick. Her highest viewership was 10,000, though that number was on a video the dealership paid to have promoted, says Bannor.

Her humorous videos are the most successful. Bannor figures that is because it really does reflect her personality. And people feel more relaxed with her. That’s important because studies regularly find that buying a car is one of the most stressful activities people undertake.

She can’t put an actual number on the sales directly linked to her social media activities. But when customers she has connected with online come into the dealership, “It is common for people to say they don’t want to buy a car from anyone but me,” says Bannor.

It didn’t take a focus group to settle on the “Just a Girl Selling Cars” brand name. Instead, it came about by chance when she needed a name to reserve an account in Facebook. The name “says exactly what I am,” says Bannor.

She gets daily messages from other sales people asking for tips, says Bannor. She is especially encouraging to other women. “As a women, when we get a little bit of encouragement, it goes a long way,” Bannor says.

From Wedding Dresses to Dodge Rams

Seven years ago Bannor was working as a wedding dress sales person and “I got the itch to sell cars,” she says.  She made it to the position of new car manager, but came back to the sales side with the idea of using the internet to bring in new buyers.

A millennial herself, Bannor sees the internet as an especially important tool to reach that age group, defined as those born from the early 80’s to the mid-90.

“All customers and the internet are joined at the hip,” she says, “But educating yourself about the buying style of millennials is very important.”

Millennials grew expecting instant gratification, says Bannor. And like every customer, they want to feel like the person they are dealing with values their time. Social media is where they prefer to communicate, and it is also efficient for Bannor.

“Social media reaches the biggest clientele base I can with a few key strokes,” she says.