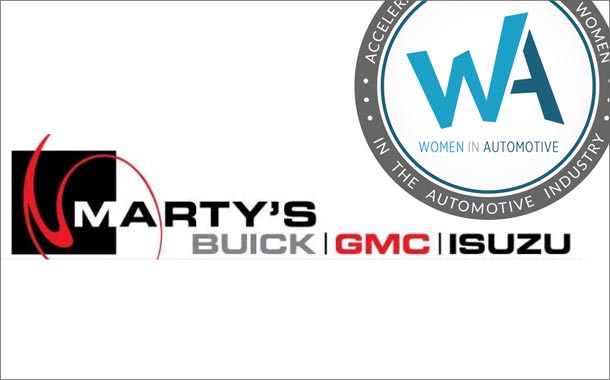 To celebrate its recent grand opening, there were three days of events at Marty’s Chevrolet. They included serving local fare such as lobster rolls and clam chowder; live local music; and a live broadcast from the dealership by a local radio station.

The dealership donated $10 to the local food bank in honor of every person who dropped in. It is all part of Christine Alicandro Karnolt’s philosophy of how a dealership should operate.

“I want to help the communities my dealerships are in,” says Karnolt. “I feel I have a calling to do that.

To Karnolt, the new owner of the Chevrolet franchise in Bourne, Mass., the retail car business is all about personal relationships, with the community and with her employees. That guides her as she opens her newest dealership.

“I have no desire to own a whole bunch of dealerships,” says Karnolt. “I want to know all the employees personally.”

At the Chevrolet store in Bourne, Karnolt spent two days with the store’s employees doing team building and orientation. She wants to bond with the employees, and she wants them to bond with each other.

“I think you need to like the people you work with,” says Karnolt. “If they don’t like [a fellow employee] that means they don’t have an understanding of that person.”

That kind of team approach is an important component in Karnolt’s plan for creating a great customer experience at her dealerships. She wants a vibe throughout her stores that the people who work there are happy, says Karnolt.

She has quarterly meetings that bring all the employees in a dealership together for dinner and games. It’s a light fun atmosphere, but there is a serious goal – to get everyone on board with the dealership’s mission, which emphasizes how people are the greatest asset and team work is how the dealership can grow and prosper.

“It is important to be sure everyone believes in and understands it,” says Karnolt. “Success is working together.”

Karnolt herself is an important ingredient in the Marty’s equation for success. Her new Chevrolet store is 23 miles from her other stores in Kingston, Mass. She plans to shuttle back and forth between the two locations. And to stay involved in both communities.

“I truly believe my role is to be the face of Marty’s,” says Karnolt.

Karnolt owns Buick, GMC, and Isuzu franchises in Kingston. They sold some 1,400 new and used vehicles in 2015. At the Chevrolet franchise, she aims to sell 600 new and 400 used next year.

General Motors awarded the Chevrolet franchise to Karnolt through a bidding process. In January, GM issued a request for applications for the point in Bourne. It was the right product and the right market place, says Karnolt, so she put in an RPA.

That involved first filling out an extensive application covering Karnolt’s experience, her current operations, future plans, and why she was the best candidate. After sending it in, Karnolt received a phone call from GM’s dealer development team telling her she was a finalist for the point.

In March, she, her executive manager, and assistant manager went to the northeast regional office in Danbury, Conn. and gave a presentation. Two months later, Karnolt received a phone call telling her she was being awarded the point in Bourne. She wasn’t intimidated.

“I feel I have the processes and standards in place after developing the team at Marty’s for so long,” says Karnolt. “I am ready to expand and confident I can duplicate those to a new market place.”

Currently, the Chevrolet store is housed in the former Sports Auto World building on Bourne’s “Transportation Highway,” so known because it includes Buick, GMC, Toyota, Subaru, and Harley-Davidson dealerships, and an RV store.

The Sports Auto World building isn’t large enough for her anticipate volume, says Karnolt. She will continue to operate there while she investigates other options.

Growing up in the family business

Karnolt grew up in a dealership. Her father, Martin Alicandro Jr., started the original Marty’s GMC dealership in 1967. It sold light, medium, and heavy-duty trucks as well as tractor trailers. “We had it all,” says Karnolt.

By the time she was 12, Karnolt was tagging along with her father to work on weekends (she doesn’t have any brothers), and sweeping floors, putting parts on shelves and other chores. By 15, she had taken on some operational responsibilities, says Karnolt. Though she could have stayed and worked at the dealership, Karnolt went to college, earning a business degree.

“By the time I went to college, I was pretty involved in running the business for [my father],” says Karnolt.

She graduated in 1987 and went to work full-time at the dealership. Her dad had always been in truck business, but Karnolt had bigger plans for Marty’s. In 1998, she purchased majority ownership in the business and transformed Marty’s GMC into a state-of-the art facility with a 5,000-sq. ft. showroom.

Karnolt also made the atmosphere warm and friendly to appeal to the growing number of women and other retail buyers of trucks and SUVs. The business expanded rapidly growing from 15 to 45 employees in 15 months.

GM was pushing its Project 2000 program at that time, and wanted Marty’s GMC to align with Pontiac and Buick brands. In 2005, Karnolt acquired a Buick Pontiac dealership and combined it with Marty’s GMC.

It was a big year for Marty’s and for Karnolt. That same year, the opportunity to acquire an Isuzu dealership that was “really strong in medium-duty” trucks came up.

While her dealerships were growing like mad, Karnolt also decided it was time to get married and start a family. By 2005, she had two children under the age of two. “I went on an aggressive search to seek out a general manager,” she says. “Six months later I had a GM who is still with me today.”

Being a woman in the auto retail world has been a challenge, especially in her early days, says Karnolt. “I had to be determined and tough,” she says.

Having others in her corner that wanted her to succeed, including her father and other male employees, helped a lot.

“You have to be confident to lead anybody,” says Karnolt. “It wasn’t easy but it was a path I knew I wanted to take. I was prepared for the road blocks and detours.”

Marty’s Buick GMC is the number one Buick GMC dealership in the state of Massachusetts. Karnolt’s kids are only 12 and 14, so it isn’t clear if they will want to work in the dealership business. But her niece Erika Pikor, 30, is deeply involved. Karnolt calls her “the future of Marty’s.”

“If my kids want to get into the business, that is fantastic,” says Karnolt. “She will be able to bridge the gap between me and them.”

The automotive retail experience is evolving, with more people shopping online and other changes such as car sharing and autonomous vehicles. Karnolt figures her personal approach to selling cars will still be important in the future, however.

“I think regardless of all the technology, at the end of the day people still want that face-to-face communication,” she says. “A computer doesn’t show that you care, that you are helpful, that you will fight for your customer.”

A computer also isn’t involved in the community. At Marty’s Kingston location, on a weekend in November, the dealership was a sponsor of the Plymouth Thanksgiving Day parade and had a train in the parade that collected food for the Food Bank along the route. It also was the main sponsor of a raffle for a trip to Disney World, raising more than $20,000 to renovate the local youth center.