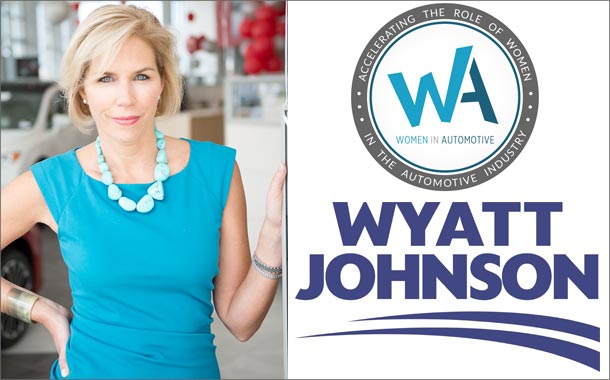 A Tennessee dealership group benefits from a woman’s touch

Katherine Johnson Cannata, dealer principal at Wyatt Johnson Auto Group in Clarksville, Tenn., never assumed she would take over the family business. Indeed, the Clarksville native left to go to college, got a degree in accounting, then worked in Atlanta.

After they had a baby, she and her husband were ready to shift gears so they moved back to Clarksville. That same month, the Group’s controller quit. In September of 1999, Cannata begin working at Wyatt Johnson.

Now, she runs the Group together with her brother. They have grown the Group by adding new franchises, but also by moving into related business lines. It’s a strategy that has worked well.

The Group has eight brands – Buick, GMC, Toyota, Hyundai, Kia, Mazda, Subaru, and Volkswagen – and six rooftops.  In 2015 new and used sales averaged 510 units a month; this year that is tracking around 550, says Cannata.

Cannata and her brother took over the business in 2007 when their father died. She has been controller for eight years at that time. She and her brother are co-owners with her other two sisters. The other sisters do not work at the dealership though one is a professional photographer and takes the employee photos.

For the first year, there was some confusion among the employees regarding the new business model, so the Johnsons hired a consultant.

The consultant recommended a new strength-based model. That did the trick.

“It was phenomenal,” says Cannata. “We communicated that to the entire organization. By late 2008 we were rocking and rolling.”

When they took over the Group, it included Buick, GMC, Hyundai, Subaru, Mazda, and Pontiac. They lost the Pontiac franchise when the brand was discontinued, but added Toyota, Kia, and Volkswagen franchises.

The Group had a body shop that was costing a lot of money and time without a lot of payback. A friend suggested they consider becoming franchisees of ABRA Auto Body & Glass. Though initially leery of paying the franchise fee, it was the right move. Customer satisfaction improved, as did repair quality, says Cannata.

A riskier move was adding two Buy Here Pay Here businesses. In 2009, the Group had a lot of capital and a lot of customers who weren’t getting financed, says Cannata. They visited BHPH stores and looked at the financial statements, thought about it for year, then decided to commit the capital. They set a three-month deadline to set up the business.

“We did it [and] we have made a nice return on our investment,” says Cannata.

Within the year they set up another BHPH store. It hasn’t grown as fast as they anticipated, but is still a good investment, says Cannata. The key, she says, is finding the right people and bringing in the right cars. They use the AutoZoom underwriting platform.

BHPH isn’t the right line of business for everyone, says Cannata, especially in a time like this when credit is cheap and money is flowing. One key to Wyatt Johnson’s success has been a steady supply of vehicles for trade-ins at its new car dealerships.

“We don’t have to live with the auction,” she says.

Cannata is well-qualified to offer business advice. She worked for Price Waterhouse in Atlanta after graduating from college. At PW, she studied financial statements.

She feels being a woman in what is still a male-dominated field i.e. owning a dealership is a benefit rather than a hindrance.

“My voice in our meetings is so much more valuable because it is so much more unique and represents a different viewpoint,” she says. “It is a tremendous benefit for the dealership, our community, and the whole auto industry.”

For the last four years. Wyatt Johnson has been on the list of the Nashville Business Journal’s fastest growing businesses.

The Group is looking to grow by adding franchises. She would like a Chevrolet or Ford franchise, says Cannata, but franchises don’t change hands very often in Clarksville. Though they are always looking at possible acquisitions, they don’t have any lined up for this year, she says.

Right now, they are busy building a new Kia and a new Volkswagen store. All the other dealerships are new or fairly new. Having nice facilities is important to Wyatt Johnson as well as to the manufacturers, says Cannata.

“This is my home town,” she says. The dealerships “have my name on them. They need to look good. Just like our employees need to dress well. One of our core values is we lead in quality products and service.”

She would like to be ready for another acquisition in 2017, says Cannata. Meanwhile, “we are always training and trying to get better. Our bar is world class.”