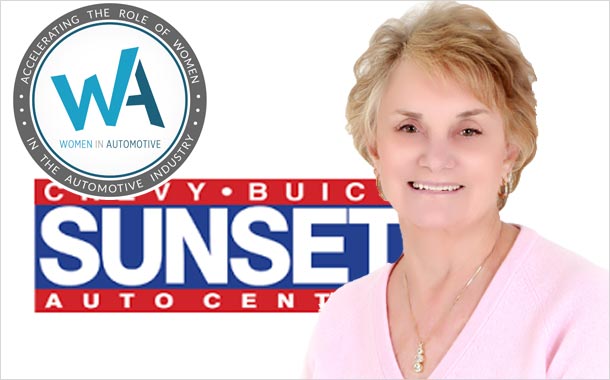 Cheryl Bedford, the new chairperson of the California New Car Dealers Association, remembers the exact date she moved into the head office of Sunset Auto Center, a Chevrolet Buick dealership in the central California coastal town of Lompoc – January 10, 1983.

Bedford overcame that fear and has successfully run the dealership for decades, with the help of her husband George. They don’t want to add any franchises, she says.

“I am extremely content to just be where I am and who I am,” says Bedford.

Growing up in California Bedford, 73, worked in her father’s Chevrolet dealership in the Inland Empire area of the state. Even though it “wasn’t cool” for girls to work at a car dealership back then, Bedford did so starting in her early teens. She recalls when she fell in love with the car business – it was during a ride in a car with her dad, but not just any car.

Though she never wanted to repair cars, “I sure did like to drive them,” she says.

Bedford worked in a number of California dealerships in the 60’s, in departments ranging from sales to leasing and F&I. She reminisces about new model launches in then, when the dealership would cover the windows with butcher paper to hide the new car, the tear down the paper and “Tada, it was new car time,” says Bedford.

Eventually “I figured out I wanted to be a dealer,” says Bedford. Her brother Rob was running the family Chevy dealership in San Bernadino, Calif. so Bedford started looking for a dealership of her own.

After getting turned down many times, Bedford found out from a friend that the dealership in Lompoc was for sale. The deal was closed in about an hour and a half, she says.

Bedford credits Motor Holding for helping her to succeed in the early days of ownership. Motor Holding, a subsidiary of General Motors established in 1929, provides operating capital to dealers – “those with integrity, ambition, and a willingness to work,” says the Motor Holding website.

Motor Holding gave her much more than just capital, says Bedford. Coming in four or five months after her acquisition, Motor Holding taught her the finer points of running a dealership.

“Motor Holding was an education,” she says, “Like going through a Master’s program, with a hands-on” element.

Motor Holding didn’t interfere with her running of the dealership, says Bedford, but people from the firm would come in and look through the books and offer knowledge. “They kept us on the right track (and) gave us best practices, she says.

She met her husband George at the dealership. He was running the regional airport down the street and happened to be in the dealership when Bedford came to check it out.

“He was the first person I met when I walked in the door,” she says. “He was running for city council, and opened the door for me. He was my first friend here.”

Bedford added Oldsmobile and Pontiac franchises, but those marques are gone. “We stuck with GM through it all, “she says.

The dealership now sells about 350 new cars a year with the two franchises. Along with her brother, Bedford funds the Bill and Harriet Bader Memorial Scholarship (named after their parents). It offers a scholarship to a student pursuing a career in the automotive industry. Bedford also chairs the CNCDA’s scholarship fund.

Bedford is the first woman chairperson of the CNCDA. “We are proud of Cheryl’s assuming this leadership position for the largest state dealers association in the country,” CNCDA president Brian Maas says. “Her breadth of experience and commitment to operating her store while assisting her fellow dealers is much appreciated.”

Bedford says one area she aims to work on as chairperson is making human resources compliancy in the State of California less complex. “There are so many rules and regulations,” she says.

None of her five children are interested in the car business; nor are their grandchildren, says Bedford. But when asked about retirement she says, “We haven’t thought that far ahead.”