Manuel Prieto is growing a dealership group in the California Central Valley. He has made several acquisitions and aims to continue to expand. Right now, however, Prieto is giving all his attention to his latest acquisition.

“Our little footprint will continue to grow,” he tells Automotive Buy Sell Report. “(But) right now the focus is on Mazda.” 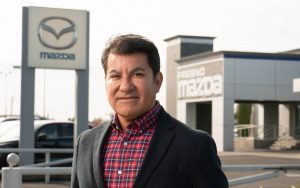 Within the next two years, he will modify the building that Mazda now occupies to match Mazda’s current image program, known as Retail Evolution.

The newer facility is much larger than the previous Mazda dealership, says Prieto. In fact, it is the largest store he owns in terms of space, he says. Moving Mazda into a newer facility is one key to Prieto’s plans to grow the brand in the Central Valley.

Under its previous owners, he says, “Mazda has always been in the background, it never had its own building.”  Yet, is the largest Mazda store in the Central Valley.

“We need to create awareness of the brand,” he says.

With a larger, nicer facility he can take better care of his customers “in a much more luxurious way,” says Prieto.

Already, he has added sales staff and a business development staff for both sales and service. He is expanding the pre-owned inventory and started certified pre-owned sales, which Harris did not have.

In the service department, which Prieto described as “neglected by not having the right personal, he has hired a new service manager.

Prieto says he doesn’t need managers, he needs leaders. He trains his managers to be comfortable in making decisions, whether that is to act of not to act, says Prieto. “The culture of a store starts with the people at the top,” he says.

He sees two sets of customers at his dealerships, internal and external. “We focus on the employee as much as we focus on external customers,” says Prieto. “At the end of the day, any customer visiting should feel how I do business. They should feel this is different in the way they are received and the way they respond to what we do.”

That is the philosophy Prieto has applied at his other two dealerships in the Fresno area. He owns a Ford-Subaru dealership, a Chevrolet Buick GMC store, and now the Mazda franchise.

The Central Valley’s economy relies heavily on agriculture, and Ford and Chevy are his “bread and butter” brands, says Prieto. But Fresno is growing and becoming more diverse, so there is a lot of opportunity for Subaru and Mazda, he adds.

Prieto, 51, has been in the retail automotive business for 35 years, all of them in Fresno. His acquired his first dealership in 2012.  His wife, an attorney, now works as the treasurer and secretary of his growing dealership group. She also helps with buy sells and the corporate paperwork, he says.

His 18-year old son and 20-year old daughter are both in college, but they work in the stores in the summer, says Prieto.

Prieto aims to continue to expand in the Fresno area. “As an organization, we are always looking for opportunities,” he says.